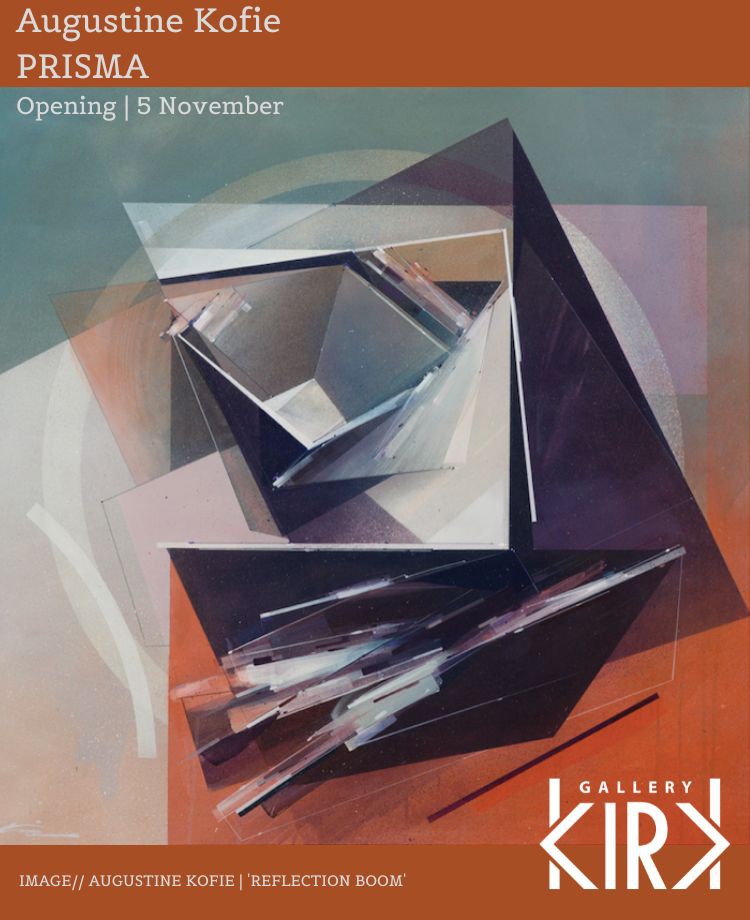 5 - 26 November
It is with great pleasure we are about to open a solo show with Augustine Kofie.
Made in 2022, the PRISMA series of works on canvas is part of Kofie’s ongoing industrial approach to fine art, which incorporates techniques such as overspray, tape blocking, detailed handwork, deconstruction, and draftsmanship drawn from architecture and graffiti. Despite the precision produced by these techniques, PRISMA was created through freestyle, intuition, and improvisation, producing a painterly, atmospheric series in a dusky palette, while still exploring collisions of forms, layers and transparencies to create abstract scenarios that somehow hang outside of time.

As a native of Los Angeles, Kofie was struck by the unfamiliar pattern of triangular rooftops that repeats across Aalborg’s residential skyline. This pattern informed his first mural in Aalborg, Ekkolokation, painted as part of the 2021 Out in the Open Mural Festival, and appears again in these new works on canvas. The circular form, always prominent in Kofie’s earlier work, appears here as a background horizon or a fragment in the foreground. The visual form that dominates in PRISMA are the splintered breaks produced by the friction of shapes clashing against each other. These splintered fractures, which gather and refract all the light in the paintings, are the offshoot of Kofie’s graffiti work and hold all the pleasure, energy, and symbolism of that work.

SOUNDTRACK FOR THE SHOW

For every solo exhibition, Kofie creates a soundtrack. The music is assembled as part of the work process, which is both sonic and pictorial. This mix blends experimental chill hip-hop beats, including extended, up-cycled sophistso-pop saxophone, new wave blues breaks, lo-fi telefilm intermissions and poignant dialogue relevant to the exhibition theme and tone.
Soundtrack >>
WORKLIST >>