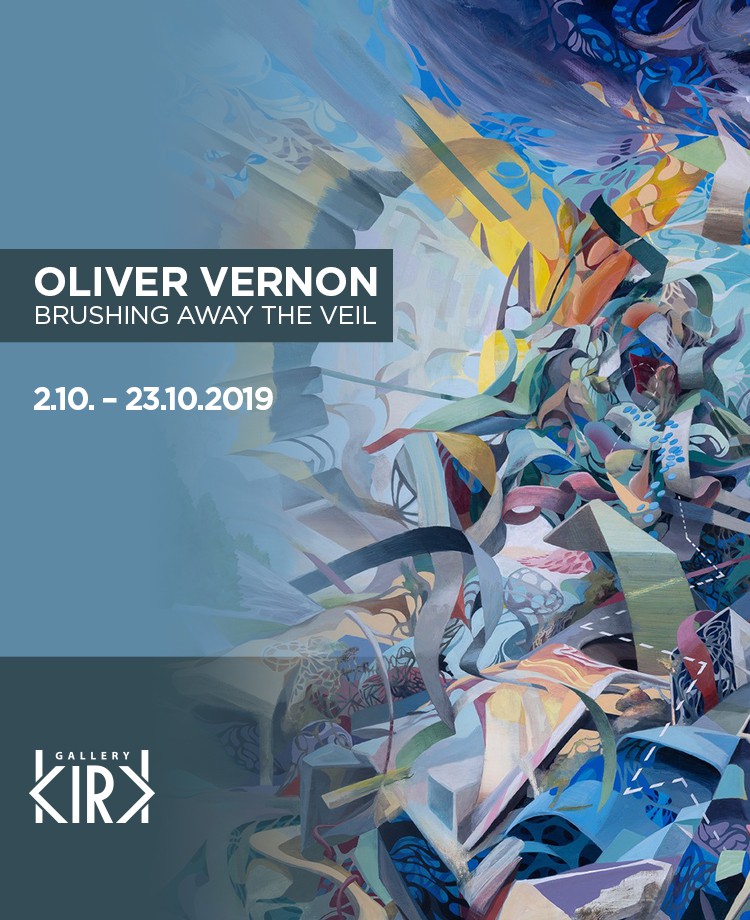 BRUSHING AWAY THE VEIL

It is with great pleasure we are now opening the second show by Oliver Vernon at the gallery presenting a new direction in his work.
With the show the viewer will be able to see a complete new development in the work of the artist, taking his work to the next level, this time only working with acrylics instead of paper, abandoning the collage process altogether.
Taking this new direction has opened up a large number opportunities for the artist, turning into an incredible body of new works, with a building desire to return to direct painting.
Oliver Vernon puts it like this:

“This body of work was a return to direct painting after years of using collage as a means to deliver paint to surface.
Priorly I was painting on large rolls of paper as a starting point, to enable a sense of freedom of loose paint handling without needing to know how it would fit into the eventual compositions. The paper was then ripped and torn into fragments which were then recomposed onto panel. This allowed me to find new types of juxtapositions of color and form outside of my habitual tendencies, which fulfilled a need to plow into uncharted visual territory. I adhered to this method so as to develop a consistent new language. As satisfying as it was, there was a building desire to return to direct painting, and then finally for this show I abandoned the collage process altogether.”

THE MANY LAYERS
With new possibilities arising, and new tools to use, suddenly each piece had a whole new dimension to the artist.
Vernon explains it like this:
“Most of the works in this exhibition were begun separately years ago, and then gathered together earlier this year into what was to become this body of work. In the early months of production I was undergoing the usual stages of experimentation without the imperative of cohesion. Each piece had the chance to dart off into its own direction. As the process continued, there was a point at which a common thread began to weave its way through. It was like descending down a staircase into the depths of my own art history. Techniques that I had left in the past began to flow back into the present. It was as if I unlocked an inner vault, allowing past and present to mingle. A large part of this had to do simply with brush size. In recent years I have swayed towards larger brushes, removing the emphasis from small detail. During this production, due to the smaller scale of the works, I returned to the use of small brushes. This unleashed a series of techniques specific to the scale. It was like an unexpected wave took me, and I just rode it, infusing all the works with extensive treatments of micro-scaled interconnectivity.

There was another unique aspect to this body of work, which was the excavation of buried paint layers through sanding. Since many of these pieces have had numerous stages of accumulation, they were like gold mines of hidden color. There was a stage were I began to sand through the layers. As the unexpected colors were revealed, a whole new technical sensibility emerged. The sanding tools became painting tools. Forgotten history brought to the surface. The textures of abrasion engaged in a dialogue with the rest of the brush-applied paint. These sanded passages felt like mist, smoke, foliage, atmosphere. I began to see figures emerge, populating the abstract environments, contributing to the worlds-within-worlds view.“

BRUSCHING AWAY THE VEIL
As described very vividly by the artist, in this manner he slowly brushes the Veils away, where the title of the show refers to our notions of reality and logic based on our limited categories and defined compartmentalized meaning of our world and universe. Underlying our limited concepts is the sea of uninterrupted interconnectivity, in which energy flows without boundary or containment..

Oliver Vernon was born in New York in 1972, and lives and works in Grass Valley, California, today.
He received his BFA from Parsons School of Design in 1995.
This is his second show at KIRK Gallery, with whom he also did a large mural in the Spring.
OLIVER VERNON

BRUSHING AWAY THE VEIL