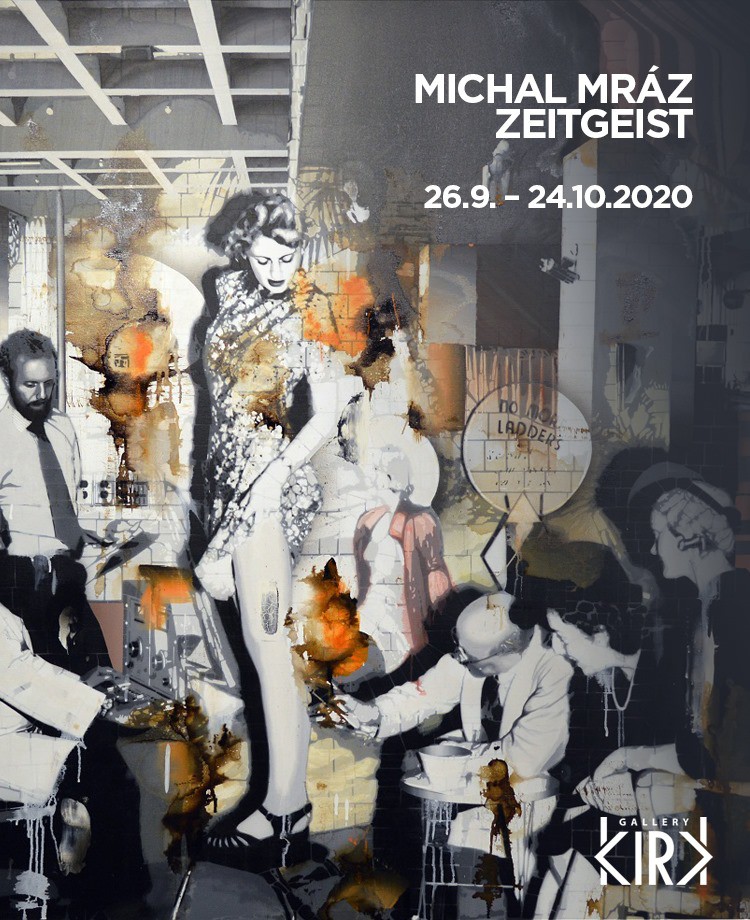 26.9. - 31.10. 2020
Worklist >>
It is with great pleasure we’ve just opened a new solo show with the young talented Michal Mráz, who's made a substantial impression on the art scene of contemporary art for the last few years, juxtaposing cultural impressions from a large number of different cultures in a chaotic landscape with reference to the many impressions we get exploded with on a daily basis in a globalized world, which only seems to get smaller and smaller.
In the middle of all this chaos he manages to depict groups of people trying to find their own place in a crazy world doing something very everyday-like in the middle of all the confusion.

‘ZEITGEIST’
While the world is changing at enormous speed it can be very hard to capture all the new currents, gain foothold and in the end express this on an artistic level.
According to the artist, in pace with the surroundings, we experience a ‘Zeitgeist’ (time spirit) of constant change and chaos, and for the art to be able process and convey the development it has to constantly depict the world as an ever chugging obstacle, and to be able to change it.
With this as the starting point of the works at the upcoming show the artist called the show ‘Zeitgeist’

ABOUT MICHAL MRÁZ
Although the young Slovak painter Michal Mráz (1987) has a sculptural education and street art beginnings, its main expression after 2013 is the special position of almost black and white a painting that is full of crisis situations, criticism or rebellion against the current world of the rich and powerful, money and capital.

The painter combines pictures from various sources, current internet, randomly but also from old magazines or newspapers - connected into a heterogeneous whole. They are created that way remixed image fields that refer us to the advertising visuality of the 1950s and 1960s century.

Michal Mráz situates most of his scenes in several scenes in disturbed, restless or demolished interiors. It is a series of unstable, chaotic architectures of ruins, where the keyword is ubiquitous clutter.
Michal Mráz seems to bring active family the happiness of an American dream, the role of a laughing mother - housewives, crowded banquet tables, punched American iconic products: Coca Cola, McDonalds fries, Warholes Campbell cans, etc. (Dinner, 2020).
Recently Disturbing and permanent snowfall into relaxing moments of the family becomes a characteristic element well-being (BBQ, 2020, September, 2020), or even snowstorms with a guy in the ear under majestic palm trees (Calamity 2, 2020).
This fragmented scenario metaphorically refers to the fault (non) functioning of the world; to the collapse of the whole system, or the re-enaction of many wars of today's conventions.

Finally, idyllic family scenes evoke a feeling of uncertainty and disturbed order. The individual paintings thus resemble the melancholic black - and - white retro ﬁ lmy noir in which the individual ones the scenes seem to freeze in time and finally format the freezing atmosphere of the present day. Frost hybrid and critical paintings are defined for consumption and overconsumption with a distinctive slogan "IN GOOD WE TRUST" (Dinner, 2020) provide clear warning signs of our critical situation.
Michal Mráz