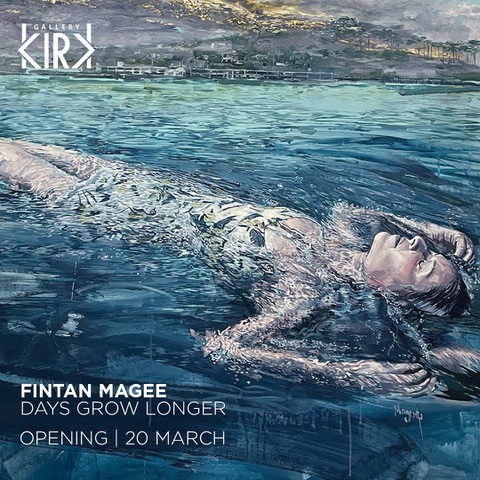 20.3. - 10.4.2021
Worklist >>
It is with great pleasure that the gallery is now ready to open the new solo show, 'Days grow longer', by the internationally acclaimed Australian artist Fintan Magee, who has been working hard on the show during times of lockdown.
From working-class subjects to environmentally-focused commentary, the Australian artist has emerged as a unique figurehead for the socially-conscious twenty-first century muralist community and is often referred to as a social realistic painter.
He is specialised in large-scale murals, and with a strong interest in society, many of the murals that Magee has made around the world often depict topics of societal concern with outset in the town or country he is working in. As part of the ‘Out in the Open’ mural project of KIRK Gallery, this resulted in the outstanding mural 'Structure'.

Fintan Magee was born in 1985 in Lismore, New South Wales, and is now based in Sydney.
Growing up with an English mother and an Irish father who met at art school and both had creative careers, it seemed very natural for Fintan Magee to start drawing and experiment with graffiti already as a child. Later on, his parents moved to Australia where Magee grew up in Brisbane in a neighbourhood where graffiti was a natural part of being a teenager in high school.
At the same time, it was a working-class neighbourhood from which the social consciousness found in Magee’s work grew.
Magee puts it like this:
‘Looking back, I realised that, in particular, the big art institutions and artists themselves weren't really connecting with working people. When I started painting murals, I saw that as an opportunity to just reconnect with people who don't have "capital A" art as part of their daily lives in a way that feels natural. I feel like that disconnection is kind of intentional, particularly in Australia and Britain, and reinforces the class system.’
Drawing from personal experience and the mundane, his figurative paintings are deeply integrated with the urban environment and exude an inherent sentimentality and softness.

In a time marked by lockdowns and restrictions with no opportunity to travel abroad and photograph models for narrative pieces, the works of the exhibition 'Days grow longer' have emerged in a period where the artist has been able to concentrate exclusively on painting, diving even further into the many opportunities of expressing through the canvas. This has resulted in a series of very intense works.

Magee then began to search for inspiration and references in the world around him, his studio. A pot plant became his subject, and remaining true to his methodology, it was photographed, becoming the 'still life' of a daily ritualistic act. The shift in focus to the physical act of painting over concept development lead Magee to begin to make sense of the state of chaos and isolation that he and the world were experiencing.

With the high degree of social reference in the upcoming show from this period, the symbolism also became very clear in a new imagery of figures depicted behind glass.
Magee describes it like this:
"These works depict working people behind glass. The Arctic glass pattern used in the painting was common in middle-class Queensland homes in the 1960s and was used in French doors and windows. Some of my earliest memories of Queensland architecture was my father's silhouette through the glass doors when he got home. The work explores the role of de-industrialisation in urban communities and on the suburban fringes of Australia. The figures in the mural appear distant, disconnected, isolated, and breaking up. As middle-class homes become increasingly out of reach for working-class Australians and lower-pay and job insecurity continues to shape how we work, these paintings explore how nostalgia shapes political views, and how workers view their communities and the outside world."

Welcome to a phenomenal show with Fintan Magee reaching out of the ordinary.
Fintan Magee //